News The faith of the telegraphs - developing story

The faith of the telegraphs - developing story

The fate of the telegraphs - developing story

GTS FINNJET had four sets of engine telegraphs. One on the bridge, two on both sides of the bridge wings and a split set in the engine control room.

This gives a total number of eight to ten GTS FINNJET telegraphs. Whether there were spare telegraphs onboard, this is not yet known to me.

A while ago, I the writer, mentioned in the society internal update of searching for items removed from the ship in earlier dockings. I mentioned my wish to find especially these highly symbolic items. On the 24th of March in 2009, Mr Veikko Haapanen (GTS FINNJET Chief Engineer) instructed me to call Mr Pekka Törmänen (GTS FINNJET Electrician). Mr Törmänen had salvaged the original starboard telegraph removed in 2004 and was willing to hand over the item for the society.

At this time our society is still very small and does not have a dedicated office or museum. We agreed that perhaps the item should be loaned first to a suitable museum. I sent word to the Maritime Museum of Finland and await for their reply.

This table shows the currents status of the telegraphs

Below is a picture of the original starboard telegraph with Captain Jouko Rajahalme. Captain Rajahalme served on GTS FINNJET from 1977 onwards for eight and a half years. 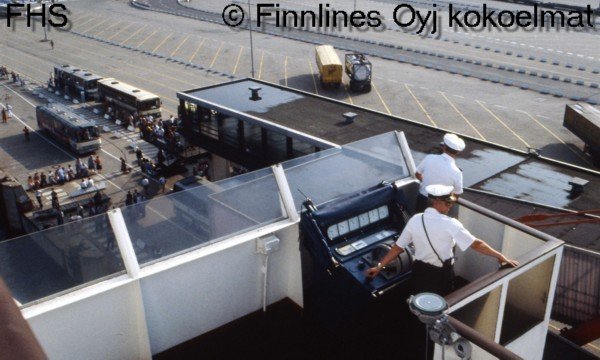 Please help in locating the rest of the telegraphs. Edited by Risto Kempas