News An operator without a ship...

An operator without a ship...

The 29th of June, 2009 was a marvellous day for the society. The chairman and his aide picked up even more GTS FINNJET folders from the STX Hietalahti shipyard in Helsinki. The V70 was loaded up rather fully as you can see in the pictures. We have now further 133 large folders, 54 smaller folders and a 50cm stack of loose plans.

I would like to thank our members STX Europe, Mr Landtman and Mr Marttinen for this fascinating and historically significant donation.

It is a rare honour, that our society now holds this operator's package. These folders were first assembled by the Wärtsilä shipyard in Helsinki for the first operator Finnlines, to be delivered with their new ship. Later on these folders went to Silja Line. Two years ago STX bought these folders from Silja. This collection has gained in size during the years.

Volvo V70 full of Finnjet foldersI placed in our photogallery some images of the 1991 vessel extension plans. These plans were made by OY Windell & Riikonen Design Ltd. We have three folders full of these plans, estimates and reports. 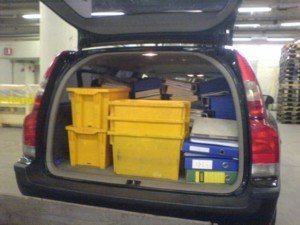 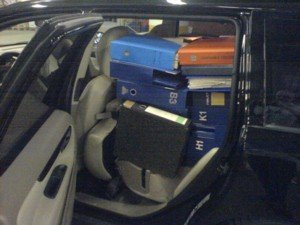