We have a little treasure in our archive and I would like to share it with you. We received a video cassette in January from the first chief engineer of GTS Finnjet. This production was filmed in 1977 and shows the ship in all of her glory. The program contains 90 minutes of interviews, a tour of the ship (a Finnish Mr Bean messes about from one compartment to another), professional and courteous language ("We have all kinds of little buttons and switches. Real captains started out as ship's boys"), plenty of music and loud singing. It is doubtful that this gem has been seen since 1977. We do not own the rights to the materials, but we're going to look into that and also hope to have the program on TV for one last time. 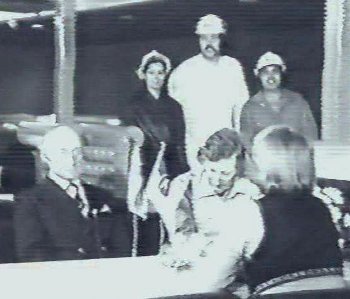 My personal favorite moment: The first captain finishes an admirable interview about the design of the ship and is followed by the voice of the foreman of the shipyard. What happens next is that they brought out a big man with a growling voice and he sings to the captain and the foreman. The expression of sheer torture and pain on the captain's face is priceless...

I have a message from captain Juha Rautavirta, that we are allowed to mention of him also having joined our society (It was his sad duty to strike our colours from the mast of GTS Finnjet in 2006). The good captain will share his pictures with all of us, so please stay tuned to this Jet-channel.